I’ve come to believe that the offshoring of American manufacturing jobs to China has a lot of similarities to the enclosure movement in Great Britain. The enclosure movement occurred in the 17th and 18th centuries when the aristocracy threw the peasants off the common land and reduced them to a vagabond underclass, all the better to create a desperate workforce to staff the factories of the Industrial Revolution.

Where there was primitive accumulation in feudal times there is now advanced accumulation. Since the advent of neoliberalism in the 1980’s, American corporations responded to shareholder demands for increased profits by downsizing or offshoring full-time employment and replacing it with a floating pool of part-time and freelance workers without benefits or job security. To grasp how we got to this point it’s imperative to understand some economic history. Since 1979 and the Volker Shock, the US has entered a post-Fordist economy where manufacturing has been surpassed by financialization. This was a deliberate policy made in large part to reassert capital’s power at the expense of workers. It has been a grand success from the point of view of America’s billionaire class.

Despite the endless praise for globalization at this point it’s obvious that the source of corporate America’s unprecedented explosion in profits in the 21st century is the offshoring of manufacturing to China. The chart below of corporate profits demonstrates the stunning rise. Globalism cheerleaders claimed that this dynamic would benefit all Americans but they lied. 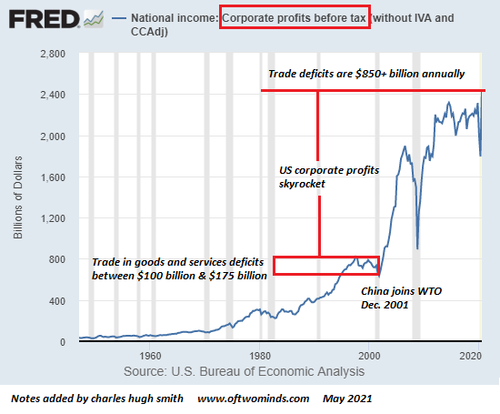 Maximizing profit is all about reducing costs. China had coal fired power stations to provide cheap energy. China had lax regulations reducing environmental and health and safety costs. China had low taxes and a minimal welfare state. China had a low cost of living so employers could pay low wages. China had all the advantages in an open globalized world.
US corporations couldn’t wait to off-shore to low cost China, where they could make higher profits.

Now, the American economy is entirely dependent on manufacturing in China. America’s short-sighted obsession with increasing profits to fund buybacks and golden parachutes for corporate insiders and vast fortunes for financiers has led to a dangerous dependency that has handed China tremendous leverage, which China is now starting to make use of. Essential parts and feedstocks become unavailable for all sorts of flimsy excuses, prices double, triple, then double again, and since we’ve allowed our entire economy to become dependent on a handful of sources for these essentials because that dependency maximized profits, then there are no alternatives

As you can see this short term profit bonanza is starting to bite corporate America in the ass. Not to mention US national security.

Because of the new Cold War being waged against China, the stupidity of the out-sourcing of manufacturing to China is getting all the attention but I think it’s crucial to note the similarities between our milieu and what Karl Polanyi called the Great Transformation.

During feudalism peasants had the time and space to create a rich, vibrant society. Even under Fordism there was time and space for society, where weekends and leisure time were still relatively untouched. Today, however, capital seeks to exploit our sociality in all spheres of work. We are in a state of harassed busyness from which-we are promised-there will never be any relief. This is not an accidental side-effect of post-Fordist labor. It’s highly advantagous for capital for our time to be short and fragmented. The loss of our time helps explain our stultified and repetitious culture. Neoliberalism promised that the destruction of social security would have dynamic effect of on culture and the economy, liberating an entrepreneurial spirit that was inhibited by the bureaucratic social-democratic institutions of the New Deal. The reality, it turns out, is that innovation and creativity require a certain amount of stability. The disintegration of social-democracy has had stultifying rather than a dynamic effect on culture, arts and creativity, in addition to the massive loss of freedom.

Personally, I think that reestablishing class power and control was the whole point, but that’s just me.

We can see the results all around us if we care to look. Primitive accumulation drove the peasants off of the land, where they could be self-sufficient, into the maw of the Satanic Mills. Advanced accumulation has likewise destroyed American society by eliminating stable work and replacing it with a temporary, on-call, precarious workforce. The result is a bleak economic landscape with its decay and hopelessness, the deaths of despair, the opioid addictions, the abandoned Rust Belt cities, the mass shootings.

On the bright side, advanced accumulation has resulted in hundreds of newly minted billionaires, one of whom was recently able to flaunt his wealth by hurtling into space atop a giant penis rocket.