In retrospect it seems obvious, but political scientist Corey Robin argues that Bernie Sanders did so well in the 2016 presidential election because he’s the first Democrat in forever to offer a trenchant political analysis of the US economy. 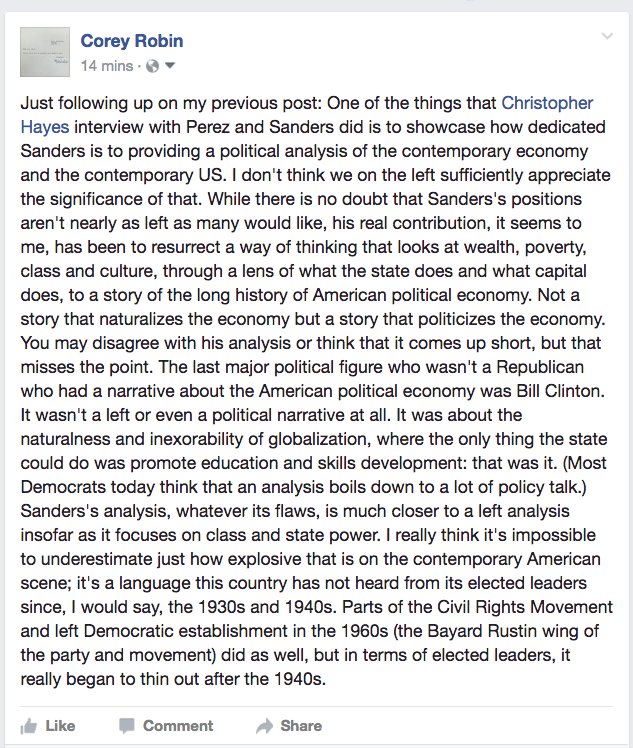 Of course, the Democratic Party doesn’t see it that way. They refuse to endorse Bernie’s critique of corporate power and the massive inequality present in the US economy. In the interview, Chris Hayes pushes Tom Perez to join Bernie in saying “the ruling class & billionaire class” are to blame for our problems. Perez refused.

Serendipitously, there’s a new book that provides a fascinating glimpse into the inner sanctum of the Democratic Party.

The just published account of Hillary Clinton’s failed presidential bid–Shattered, depicts a campaign in search of a message and bewilderment when her rival offered a popular one. Hillary Clinton and her top aides never could get their heads around what made Bernie popular–this fundamental economic policy critique leveled by Sanders.

In reviewing Shattered, Matt Taibbi relates that the Clinton campaign viewed economic policy as irrelevant. “The Clinton campaign in 2016, for instance, never saw the Bernie Sanders campaign as being driven by millions of people who over the course of decades had become dissatisfied with the party. They instead saw one cheap stunt pulled by an illegitimate back-bencher, foolishness that would be ended if Sanders himself could somehow be removed.”

Indeed, Shattered offers an account of a campaign so out of touch, that Clinton has no idea the damage that successive “free trade” treaties had done to former middle-class American workers.

According to Taibbi, “Clinton frequently acknowledged to her aides that she didn’t have the pulse of the electorate or understand the political currents. When she did campaign in Michigan, Clinton resisted condemning global free trade deals, and then drew criticism in the local press for her tepid answers.”

This is your modern Democratic Party and liberal faction of the political class. They don’t really believe in anything, except raising money from rich constituents and whip-smart campaign consultants, selling a product–said political candidate–to a sullen electorate. As a bonus, they deploy identity politics, like race and gay marriage, to distract from the neoliberal economic policies that reward their wealthy benefactors.

Since the 2016 election many political observers have ascribed Trump’s stunning win to a darker form of conservatism combined with the sheer racism of the deplorable’s who trooped to the polls to pull the lever for the political novice, in the process spoiling Hillary’s coronation.

I call bullshit. For the Democratic Party and their liberal-intellectual-class it’s much easier to blame racism or the nefarious Russians rather looking in the mirror.

In my opinion it was the deteriorating economic situation among America’s former middle-class voters that fueled Trump’s win. Many of these same Americans voted for Obama in 2008 and 2012, expecting Hope and Change. When they got neither and saw that Hillary was promising more of the same they took a flyer on Trump.

It was these worsening economic conditions that enabled a populist conservative like Trump to prevail–conditions that Clinton’s wing of the Democratic Party helped to create. For 40 years, working-class Americans have experienced stagnant or falling incomes, due to the policies of neoliberalism that New Democrats, like Obama and the Clinton’s have pursued.

It’s quite ironic that the Democratic Party, including Hillary Clinton, forgot her husbands overriding electoral focus in his successful  1992 presidential bid–it’s the economy, stupid.

“The rumors are true: Former President Barack Obama will receive $400,000 to speak at a health care conference organized by the Wall Street firm Cantor Fitzgerald.

It should not be a surprise. This unseemly and unnecessary cash-in fits a pattern of bad behavior involving the financial sector, one that spans Obama’s entire presidency. That governing failure convinced millions of his onetime supporters that the president and his party were not, in fact, playing for their team, and helped pave the way for President Donald Trump. Obama’s Wall Street payday will confirm for many what they have long suspected: that the Democratic Party is managed by out-of-touch elites who do not understand or care about the concerns of ordinary Americans. It’s hard to fault those who come to this conclusion.”